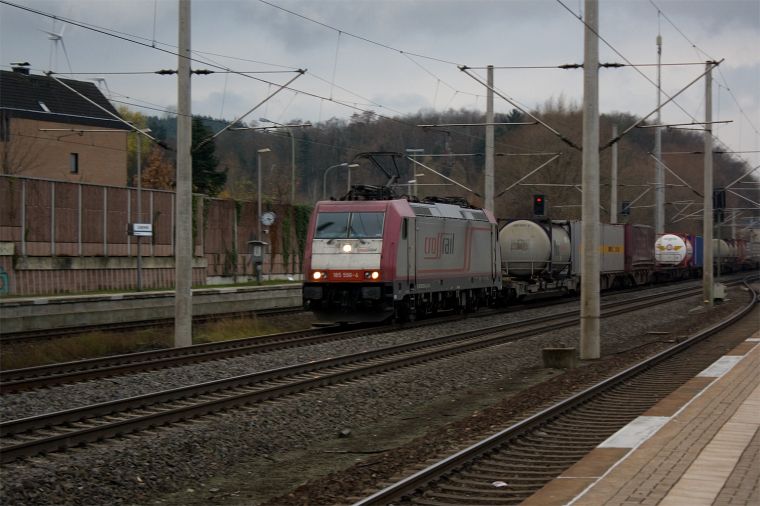 The Bombardier TRAXX platform is, in terms of numbers, among the most successful and numerous platform for road locomotives built in Germany since the second world war. Since 1997 it has become the de-facto standard for a number of national railroads, as well as all almost all leasing companies and an ever-increasing number of private railroad companies. If you ask german rail fans about this immense success, they all will reply the same thing: “Boring”.

The TRAXXes have replaced a large number of older, beloved classes, and they have come in huge numbers. It is not rare that you look into a railroad yard today and only see various versions of the TRAXX â in different colors, but still, essentially the same version of locomotive. One particular color you often see between Aachen and Cologne is the one of Crossrail, as seen here on the TRAXX 2 F140 AC2 with number 185 596-4.

Crossrail is originally a swiss private railroad, but then merged with belgian private railroad Dillon & Le Jeune Cargo (DLC). Still, both brands are used. Both use a wide variety of locomotives from a wide variety of leasing companies. This one is leased from Beacon Rail, who have leased all their locomotives to Crossrail so far. It’s capable of operations under 15 kV 16.7 Hz and 25 kV 50 Hz, but being homologated only for Germany, Switzerland and Austria, it only uses the 15 kV part. The somewhat not-that-great paint scheme of Beacon Rail shows off the typical eurofront with a huge white legally required in the Netherlands and a red bar for Italy, despite the locomotive being physically incapable of operating in either country. Here, it is passing through Langerwehe station.