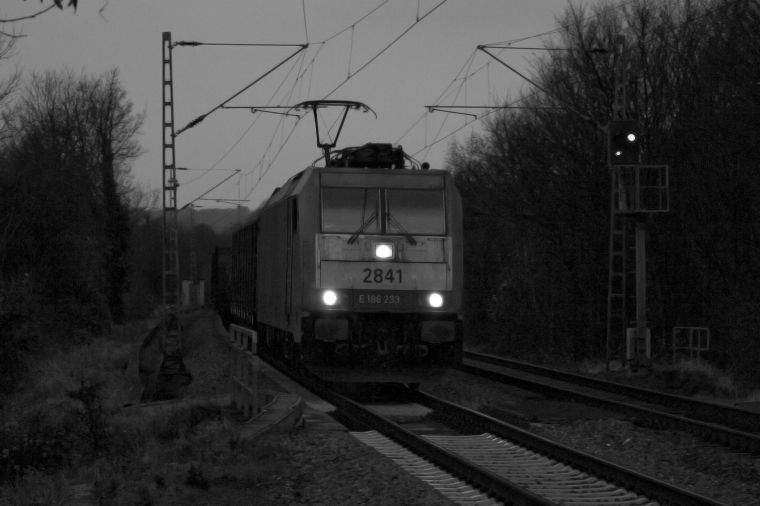 Nothberg may be closed, but that does not mean that it’s useless to go there. It still gives you a nice look on the mainline Aachen-Cologne, and this can be extremely busy, such as yesterday. Here, 2841 of belgian national railroad company SNCB/NMBS is passing through with a mixed freight train.

For those of you who just joined, this locomotive is a Bombardier TRAXX 2E F140 MS, an electric freight locomotive capable of running with four different voltages (15 kV 16.7 Hz AC, 25 kV 50 Hz AC, 3 kV DC and 1.5 kV DC), with a continuous power output of 4.2 MW and a top speed of 140 kph (87 mph), which can be used almost all over Europe, depending on the configuration. The ones that form the belgian class 28 are homologated for Belgium, Germany, the Netherlands and, for good measure, Austria. 2841 here was delivered in June 2009, making it one of the youngest machines you can find on the rails in the region.

As you can see, it has a second number, E 186 233. This is based on german principles, where this type is known as class 186, and is the number used by leasing company Angel Trains Cargo, who owns the belgian 28s. The locomotive also has an eleven-digit NVR number, uniquely identifying the locomotive within Europe and some parts outside, which is based on the german number, not the belgian one, although it does identify it as a belgian locomotive. I guess that made sense to someone. The E, as well as the red bar, are required for service in Italy. This locomotive is not approved for this at the time, but leasing companies like to operate on the “you never knowâ¦” principle when it comes to locomotive painting and lettering. The white area in front is legally required for the Netherlands, and the combination of white area and red bar has become somewhat of a standard for leasing companies.