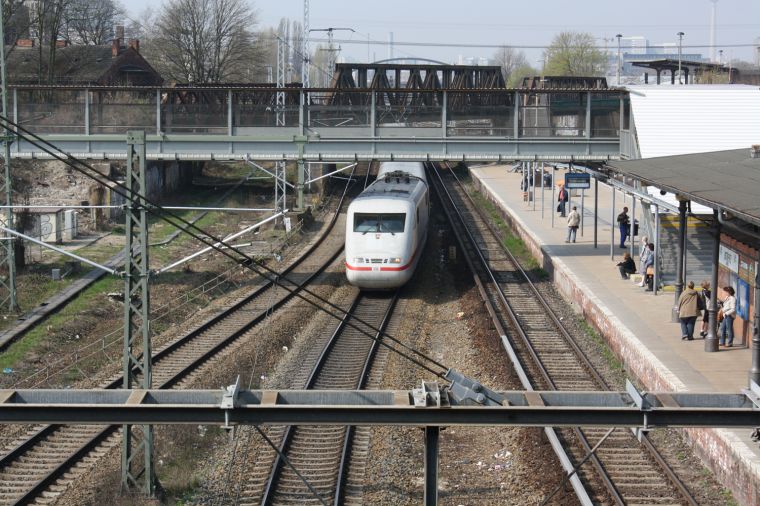 WeiÃwurst translates to Bavarian veal sausage, a form of meat that is, among other things, known for being white, long and bendy and hence the ideal nickname for the Intercity Express (ICE), especially the class 401 “ICE 1”.

Now, my statistics may be off a little, but I think this may be the first picture of an ICE 1 I’ve posted here. This is a little embarrassing considering how important this thing is for Germany’s railroads. It forms the core of Germany’s high-speed concepts. Generally it has a top speed of 280 kph (174 mph), not that high compared to newer trains that reach 330 kph (205 mph), but a prototype unit (these days referred to as ICE V, original class 410) reached 406.9 kph (252.8 mph), which made it shortly the world’s fastest train. Technologically, though, it’s not that interesting, as it’s mainly a derivate of the class 120, optimized for a higher top speed — and of course with a completely different body style.

This one is driving through Berlin Ostkreuz (East Cross), the station where the eastern end of the Stadtbahn (Berlin’s east-west rail connection) and the Ringbahn (the inner circle rail line) intersect. Ostkreuz is currently being rebuilt and it has a lot of traffic, so it’s extremely chaotic. Oddly enough, it’s also the only station I could find that still has GDR-era signage.