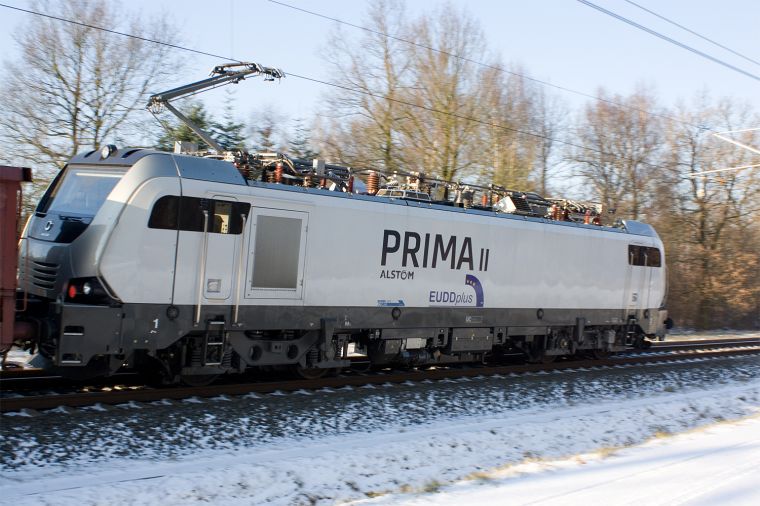 Because I was so happy that I got the Prima II prototype, here another shot of it passing by.

The Siemens test center Wegberg-Wildenrath was built on the grounds of an abandoned airfield of the british Royal Airforce, and a lot of structures from that are still visible. I guess an urban explorer with far less respect than me for “do not enter” signs could find a lot of cool things to shoot here. Me, I’m happy to shoot trains.

The main feature of the center is the outer test ring, an oval that allows top speeds of 160 kph, and which the Prima II is currently using here, together with a few french freight cars to apparently simulate freight running. There is never more than one train on the outer ring. In extreme cases, you can see the same train passing by you in five-minute intervals, but as part of the testing they also start, stop, slow down and accelerate a lot, meaning you can also easily wait for an hour with nothing to see at all. It’s tricky.

Additionally, the center has a second test ring with top speeds of 100 kph, which is three-rail track to be able to test meter gauge trams as well, and a number of special details like a ramp track, lots of static and dynamic test benches, and a large workshop that is often used by leasing company MRCE to change the country configurations of their locomotives. I’m afraid I’ve not yet found a spot where I can take good pictures of any of that, though.