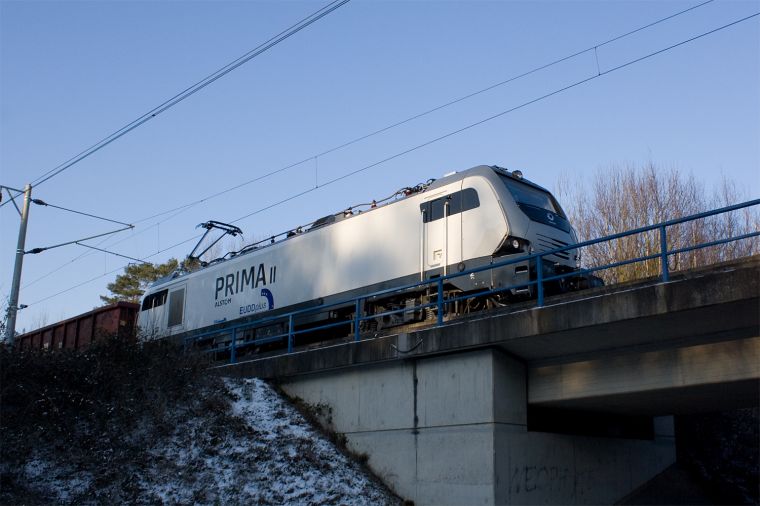 The railroad test center in Wildenrath-Wegberg belongs to Siemens, but as it is the only one of it’s kind in europe (the one in Velim, Czech Republic, allows higher top speeds but is otherwise not as technologically advanced), all manufacturers test their products here. The current star is this: The Alstom Prima II prototype.

The Prima platform is Alstom’s default platform for electric locomotives, based on a platform originally used for diesel locomotives in cooperation with EMD (examples for that are the british class 67 and, after the spanish plant and that diesel line were sold to Vossloh, the Vossloh Euro4000 (picture by :devnettwerk:)). Unlike to the Siemens Eurosprinter or Bombardier TRAXX platforms, it hasn’t sold much outside France or to private operators. The Prima II is a new version meant to change all that with a new modular design, strict integration of ERTMS, higher power output and higher top speed.

The prototype No. 1 in particular is configured as a freight locomotive for all four major european systems (25 kV 50 Hz, 15 kV 16.7 Hz, 3 kV DC and 1.5 kV DC) with 6.4 MWs power (6.0 MW under 3 kV, 5.6 under 1.5 kV), but a top speed of only 140 kph. It is also used for evaluating the new European Driver’s Desk Plus (EUDD), a prototype of which is installed in one of the two cabs. For Alstom, the Prima II is the main project they are focused on right now. I wish them the best of luck, because no matter whether you like this design or not, it’s an interesting change from all the other standard things on european railroads.