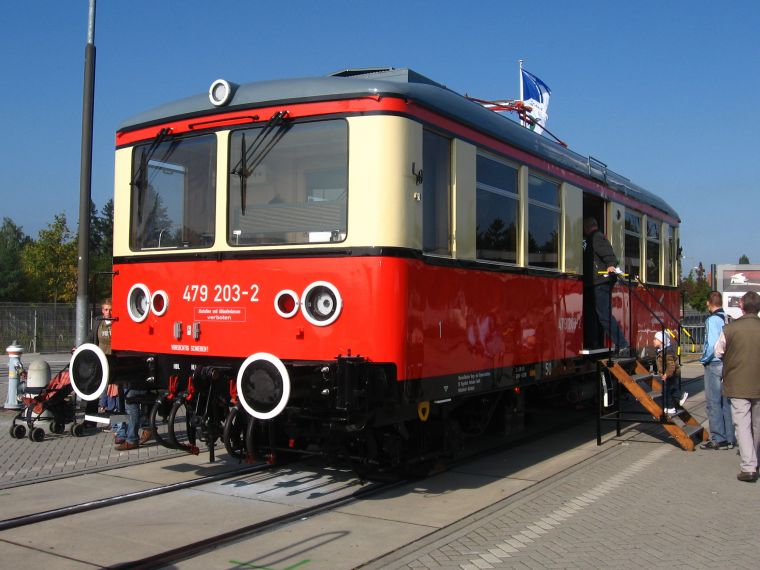 I was asked about german funiculars today, and the topic of the day is, of course, the fall of socialism. This doesn’t fit well with either, but it does somehow go into the direction.

The OberweiÃbacher Bergbahn is a small railway system in Saxony consisting of a funicular (the most well-known of it’s kind in Germany) and, at the top end, a normal railroad electrified with 600 V DC, known as Flachstrecke (literally “Flat track”). This is one of the three Flachstrecke railcars. Although it’s owned by DB, it has retained it’s original color, since the line’s only importance is for tourism.

The car is also a nice demonstration of why socialism ultimately had to fail. The issue is: What year was it built? The Flachstrecke received it’s first vehicles when it was opened in 1923. In the 1980s, replacement for them was long overdue, but according to the COMECON, it was not allowed to build EMUs in the GDR. The solution? First of all, the old cars were scrapped. At the same time, new cars (for example this very vehicle) were built, which places it’s build date in 1984. However, some small bits and pieces from the old cars were taken and built into the new vehicles, and the entire thing was called a reconstruction, so it’s official build year is 1923. And if you allow a personal note: It annoys me to no end when people who haven’t lived in a socialist country call their political opponents socialists without knowing what they are talking about. This here is real existing socialism, as it was called in the GDR, and if someone equates this with, say, universal healthcare, then I (hopefully justifiably) fail to understand this.

Finally the question: What was it doing at this exhibition? I have no idea, all I know was that this vehicle itself went through a larger repair (though not a reconstruction in the above sense) recently.