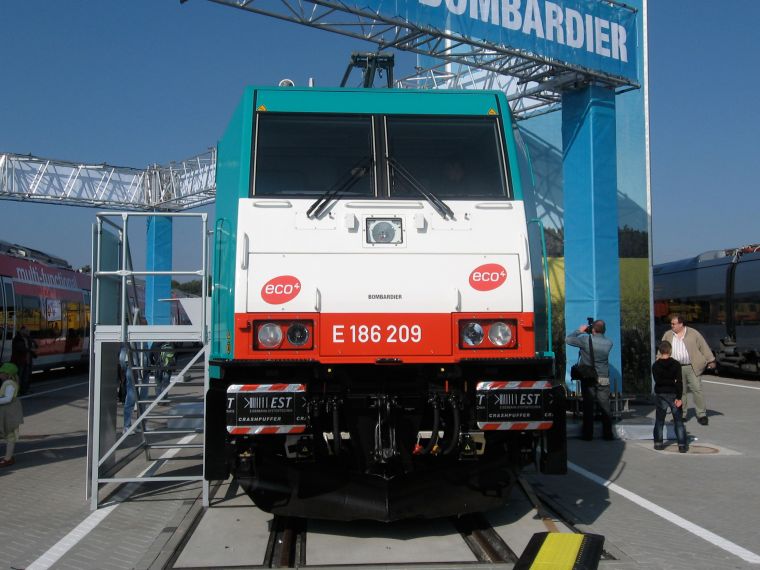 At Innotrans there are some trains that will probably never reach Aachen, some that might pass by occasionally, some that will be used close by but not in Aachen itself and a number of trains, one of which will certainly soon operate in Aachen, but only one vehicle that is guaranteed to regularly come to Aachen: This one.

The Montzenroute from Aachen, Germany to Montzen, Belgium is being electrified, and since the new belgian class 18 electrics can’t drive operate in Germany and apparently nobody thought of the german class 189 multiple-system electrics (or maybe there just aren’t enough of them), this engine (among many others, obviously) will drive there. It’s a Bombardier TRAXX F140 MS, also known as class 186, and belongs to Angel Train Cargo, who in turn leases them to COBRA. COBRA is a joint venture by german DB and belgian SNCB, with the main job of hauling trains over the Montzenroute once it’s electrified. I do hope that the engines get a more attractive paint scheme than ATC turquoise before they start service in december 2008.

The Bombardier TRAXX series of locomotives itself is boring. That’s actually mean, since the reason for it being boring is that it’s common, and the reason for it being common is that it’s rather successful. The entire series is based on the german DB class 145 (Picture by Kotbaum) but as expanded a lot since then. Among other things, it has the newest crash safety standards since two Innotranses back already (which is why the cab looks slightly different from the 145). You can purchase the engine with support for up to four different systems, with or without support for regional trains (the main visible difference are heading signs), with 140 kph (87 mph) top speed, 160 kph (100 mph) top speed or 160 kph (100 mph) top speed and cheaper trucks, and there’s even a diesel version, of which about half the interior (as measured in engine room length) is identical with the electric version. The entire thing can be homologated for wide areas of Europe. This one here is an F140 MS, which means it’s for freight, has a top speed of 140 kph (87 mph) and can be used with multiple systems (25 kV 50 Hz, 15 kV 16.7 Hz, 1.5 kV DC and 3 kV DC), and is homologated for the Netherlands, Belgium, Germany and Austria (Austria isn’t really needed, but for most engines homologated for Germany, no changes are necessary to let them run in Austria as well).