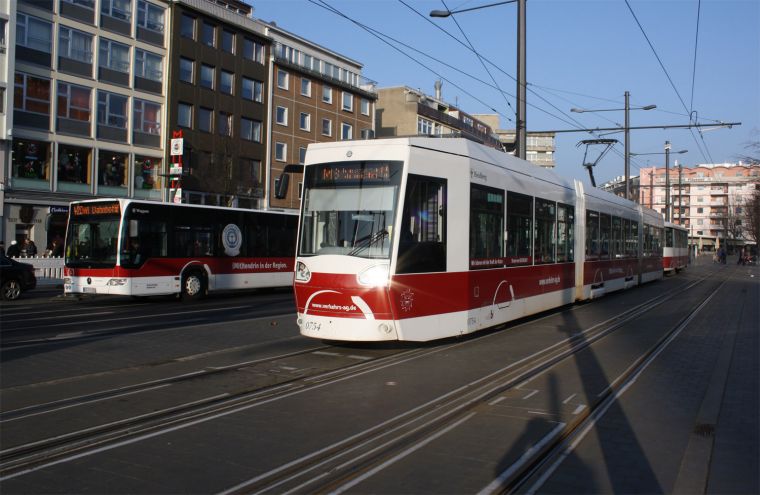 I’ve wanted to make some whimsy title about “public transportation siblings”, but my sister found some of my previous image titles rather silly, so I’m playing it safe here.

This picture gives me headaches. Basically, I don’t like it. The bus needs more room to the left, the low winter sun gives an unpleasant light (I’m not sure whether I like or hate the spark on the tram), the background is, as always in Brunswick, horribly uninspired and boring. On the other hand, the subject is not that uninteresting, showing the contrast and the similarities of the tram (a NGT8D built by a consortium of Bombardier and Alstom LHB) and the bus (a Mercedes Benz Citaro). Also of interest is the old DUEWAG trailer car pulled by the modern low-floor tram, an odd brunswickian habit.

By the way, you can also see that stretches of Braunschweig’s (the town’s german name) system have been converted to three-rail track. The streetcar system has the ungodly gauge of 1100 mm (there’s no way I’m going to convert that to inch or something), which is practically unheard of everywhere else. There are plannings of creating an LRV system, however, which would replace regional trains and give direct connections from places like Goslar and Oker to Braunschweig’s city centre. The project has everything it needs except for state and federal funding, which they hope will come soonish… Anyway, this requires a three-rail track. In the long term, it’s planned to convert the entire system to 1435 mm exclusively.