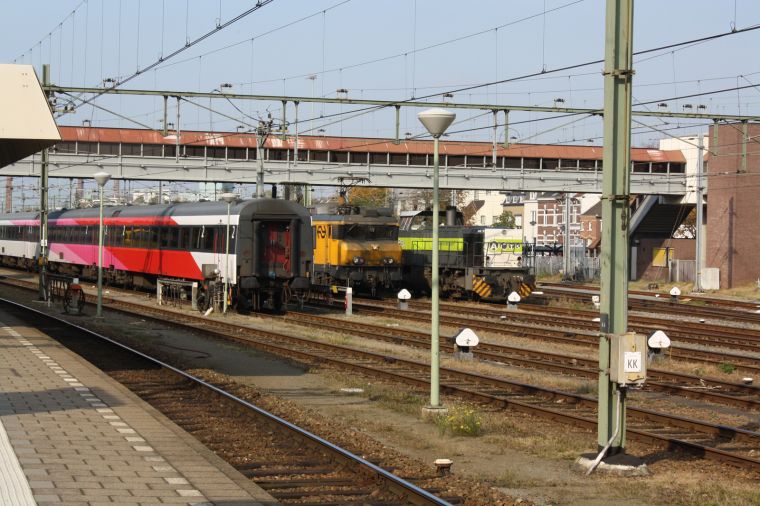 This might be the most boring title I’ve ever used, but it’s certainly not wrong. These trains, as well as others, were standing in the wide field of Maastricht’s tracks.

The cars to the left (which don’t have a locomotive, by the way) could be described as pretend platypuses. The AnsaldoBreda V250, official nickname Albatros, inofficial nickname Platypus, has been failing to provide fast service between the Netherlands and Belgium for a few years already. To still have something at all on the new high-speed line, a number of old dutch ICm cars were repainted and internally refurbished. Now, they, hauled by Bombardier Traxx locomotives, perform the same service, only with top speeds of 160 kph (100 mph), but still significantly faster than no train at all. What they were doing in Maastricht I don’t know, maybe the plan calls for all dutch ICm cars to be refurbished this way?

To the right, a class 1700 locomotive, which is more or less the dutch version of the french class BB 7200. Locomotives looking like that have been distributed by Alstom, their manufacturer, in practically all countries to the west of Germany (excluding the british isles). I always thought that they look a little odd.

Finally, a Vossloh MaK G1206, here the dutch version (which has no difference visible from the outside to the other versions, however). The Netherlands use 1.5 kV DC electrification, which means that they cannot use high-powered electric locomotives for anything, because the amperage would be too high. In fact, you’ll find that the low-powered electrics and the EMUs often have both their pantographs active to mitigate this problem. Consequently, much freight service is done with Diesels, such as this one, belonging to Angel Trains Cargo and leased to ACTS, a dutch freight railroad company that specializes in container trains.