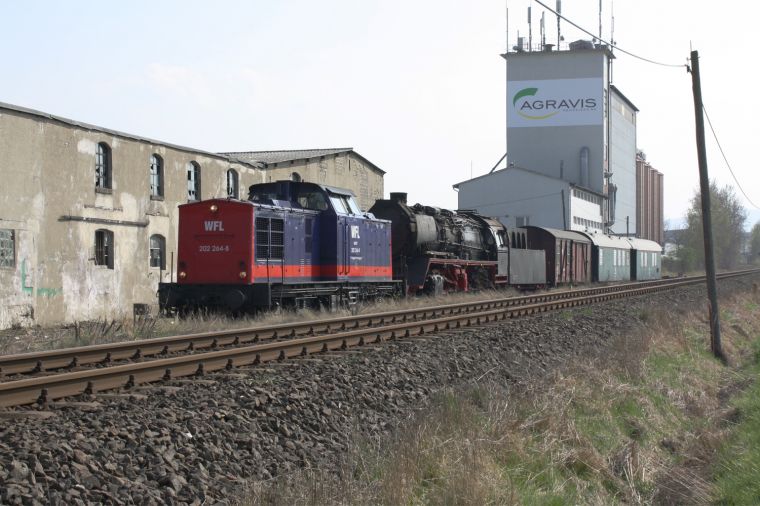 It’s a lot of fun to go out and shoot trains that you know will be there (especially if it’s steam), or just go somewhere and wait if you have a reasonable suspicion that some train will come. But what’s even more fun is hearing or seeing a steam engine you didn’t expect at all and racing to catch it in the nearest station. That happened friday.

My mother told me about this train which she couldn’t identify, and suggested I’d go to Vienenburg, the next station in the train’s direction and see if I could catch it. Vienenburg has a rail museum and club and is a point where steam trains appear often (and often without anyone knowing about it in advance), so that was a reasonable guess. Reluctantly, due to the hot weather, I jumped into my car and went there and found - nothing at all.

Making my way back, however, I suddenly saw the train move out of the station, slowly and as a shunting movement. I couldn’t get any pictures, but I knew there was an industrial siding a little further down the line to Bad Harzburg, which this train had taken, so I hurried in that vague direction, trying to find a place from which I could take pictures. And I did!

202 264 is locomotive 17 of Wedler & Franz Lokomotivdienstleistungen (WFL), a smallish company that rents out locomotives, does construction site traffic and, here most interestingly, handles transfers of locomotives. It’s the classic type of the DR V100. It’s history is so complicated that I’m just going to link to it. Most of DR V100’s histories are, by the way.

I’m not done with Berlin yet by the way, I’ll post more tomorrow.