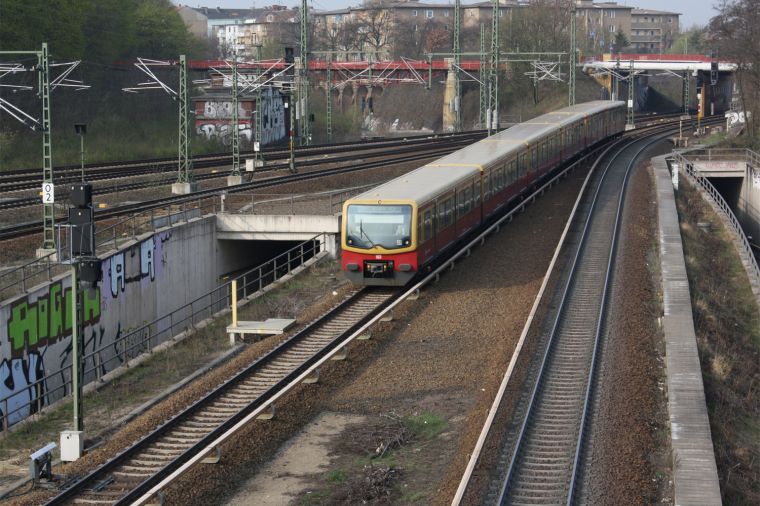 There are a number of core parts of Berlin’s S-Bahn rail network where multiple lines use the same tracks. Two of them intersect at Gesundbrunnen: The Nordbahn (Northern Line), which morphs into the Nord-SÃ¼d-Tunnel (North South Tunnel) a little further south and is the lower two tracks here, and the Ringbahn (Circe line), here the one on top.

Apart from other lines that share the circle line’s tracks on parts, there are two line numbers in use here: The S41, which goes around the circle clockwise, and the S42, which does the same counter-clockwise. Both lines use class 481/482 EMUs exclusively. The 481/482 is the first post-reunification type, and is the fastest of the three types on the network. It completes a circle run in 60 minutes, which is important to keep the timetable lined up. Circle line trains operate with ten minutes headway, which is more than some outer lines but less than some of the core lines.

The circle, which is also shared by freight and in some parts normal passenger traffic (on separate tracks from the S-Bahn), is the inner-most of several circle railroads and roads in Berlin, and has become a semi-official mark for the core Berlin. It marks the inner-most fare zone for buses, subways, trams and trains, and also the area where only low-emission cars (by a wide standard, my thirteen-year old Alfa still fits) are allowed. It’s not actually very circle-like on a map, instead the form is called “GroÃer Hundekopf” (great dog head) by Berliners — although it looks even less like that than a circle to me.