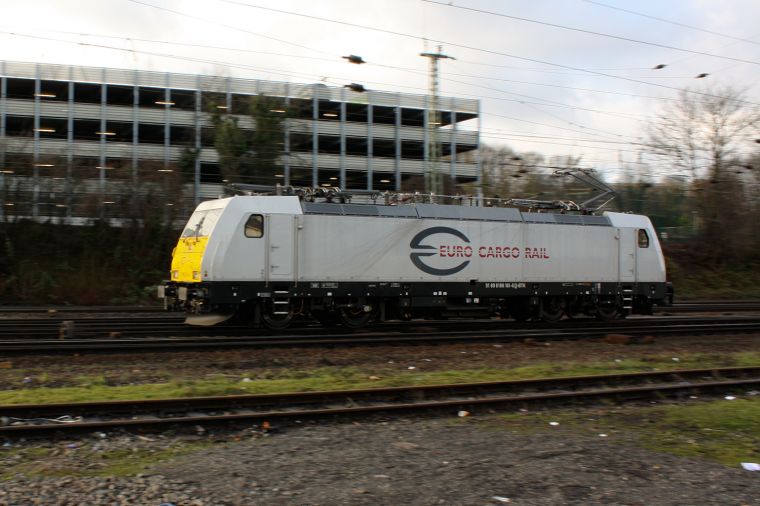 Back in December 2008, I took several pictures, including this, of then brand-new 91 80 6186 161-6 D-BTK, 186 161-6 in short, as it apparently did trial runs on the then newly electrified freight line Aachen-Montzen(-Antwerp), the so-called Montzenroute. I did wonder why it was registered to Bombardier Transportation Kassel, instead of say, Euro Cargo Rail (ECR) from France (the company whose name is on those machines, after all) or English, Welsh and Scottish Railway (EWS), as it was then still called (who owns ECR), obviously from the UK, or Deutsche Bahn (or their DB Schenker subsidiary, no idea what that was called at that time), who owns EWS/DB Schenker UK in turn.

Well, now I know: At that time, the locomotive was not yet delivered to ECR, but still owned by its manufacturer (Bombardier) and apparently doing trial runs. Now, a few months ago the class 186 (that is to say, Bombardier TRAXX 2E F140 MS) received its homologation for France, which used to be notoriously difficult to get for foreign units. New EU rules have made it a lot easier for a locomotive that is certified in one country to get certified in another, though. Today, the first two (though not this one, even though it has the lowest number of all ECR 186s) finally got delivered. Being homologated for Germany, Belgium and France, I would not be surprised to see them in Aachen â but I would not be surprised if I didn’t see them here either.

Now, ECR is the daughter of a british company, and these are their first electric locomotives with yellow ends. Hm. Nothing has been announced, but combined with the fact that the Traxx series meets the TSI Tunnel Safety Standards (which are not the same as the Eurotunnel standards, but should make it easier to meet those), it does not seem entirely out of the question that they might reach the British Isles as well. I do recall that locomotives with continental loading gauge can go to Dolland Moor freight terminal. Whether they ever will, though, remains yet to be seen. Another interesting aspect: A number of these locomotives will actually be delivered in traffic red and with DB branding instead. No idea what that means for their operations.

Here, the locomotive is passing the parking garage of the RWTH Aachen University, a decent (though not perfect) point to take pictures from, and also a secret tip for anyone who has to park in the area. Just be aware of the closing times and try to look as if you belonged to the university.