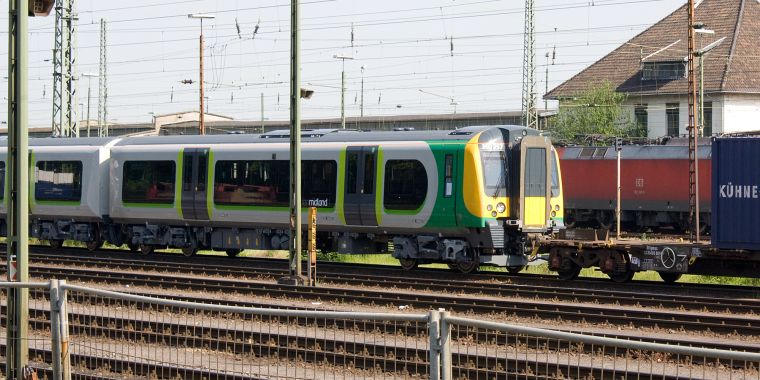 The Siemens Desiro “family” consists of a number of vehicles that have nearly nothing in common with each other, such as the Desiro Continental or Classic, the Desiro Mainline (ML), the Desiro Double-Decker of which I don’t have a picture and finally, only for service in Great Britain, the Desiro UK, as seen here in Aachen West station, Germany.

350 257 here belongs to the class 350/2 type, an EMU for 25 kV AC overhead electrification (notice that the slightly older 350/1 also works with third-rail 750 V DC which is never used in service), used by London Midland. It’s part of an ongoing order of 37 of this class (numbering started with 231) and probably came out of Siemens’s workshops further north in NRW (they have a lot). It was part of a freight train probably heading towards Belgium. The coupler adapter cars have markings saying they are qualified for Eurotunnel use, so this train will probably go further via Belgium and France before reaching it’s new operator.