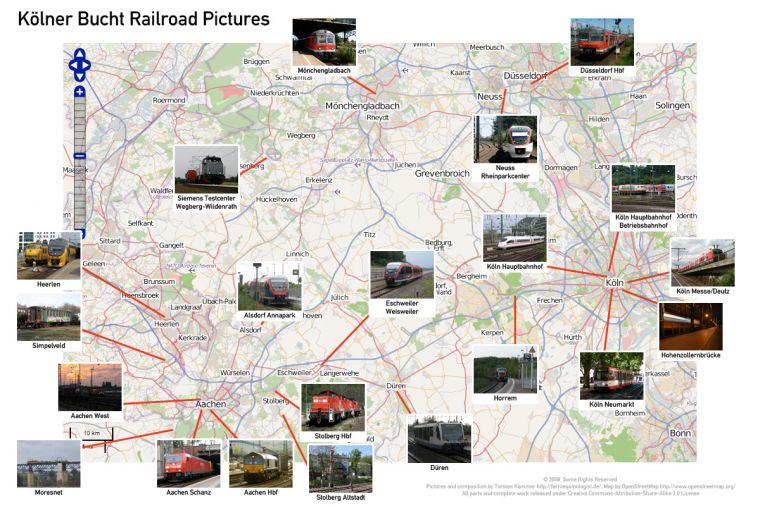 I wouldn’t be surprised if a lot of people had no idea what I’m talking about really when I mention the various towns and stations in the region, so I decided to make this map to show you all!

The KÃ¶lner Bucht is the area roughly defined by the cities of Aachen, Bonn, DÃ¼sseldorf and of course KÃ¶ln (Cologne in english). My university and consequently my home most of the year is Aachen. I tend to visit KÃ¶ln rather often and DÃ¼sseldorf not that often. Aachen is the most western german town, and Heerlen and Simpelveld are already in the Netherlands, while Moresnet is in Belgium.

Production Notes The map at the core is from OpenStreetMap, which means I can use it for free as long as I release the result with a Creative-Commons Share-Alike license, which I do always anyway. All the individual pictures in here can be found in this gallery, except for MÃ¶nchengladbach (I’ll have to upload that some time) and Aachen Schanz (I’ve always liked that image, but it’s too unsharp to post in more than 100x75). I make no guarantee on how close the red bars come to the actual location depicted, often they’d have to cut right through town names and I didn’t want that.

I tried to keep images off important railroad lines, the only case where I failed is Aachen Schanz, which hides some railroads in Belgium. You might or might not notice that I’ve not taken pictures of several more or less important railroad lines in the area. I plan to do so when I have time, but this is a long-term project for me.