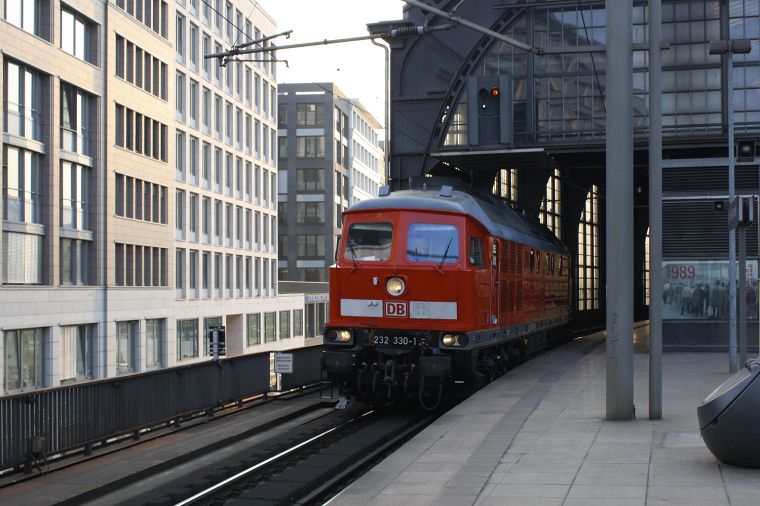 I’ve skipped a number of pictures from Berlin that were, all in all, just not awesome or otherwise interesting enough and instead decided to go straight to this one. Berlin FriedrichsstraÃe is an important station. The Stadtbahn east-west line (S-Bahn and normal rail) and the North-south S-Bahn tunnel intersect here as well as some subway and tram lines, making it an ideal location for the central station - which was, of course, built in a completely different location instead.

During the cold war, it was the first station in East Berlin (coming from West Berlin), but was partly open for normal West Berlin traffic. People from West Berlin could change here between the western part of the Stadtbahn, the North-South tunnel (which was only accessible to westerners) and one subway line (also for westerners only). At the same time, it was a normal station and the last stop of the Stadtbahn for east germany, with a huge division beteween these two parts of the station. Today it’s completely impossible to see where this separation once was.

The nicely restored station shows off some great subdued colors, as do the new buildings belonging to the new government quarter right next to it (not all used by the government), and the two actually fit together surprisingly well given the time difference. So, what better picture than a bright red Ludmilla inside all of this? Fun fact: Before the re-unification, Ludmilla’s weren’t allowed on the Stadtbahn (which is mostly an elevated railway line) due to their high weight (about 120 metric tons), although they were still occasionally used, when nobody was looking.