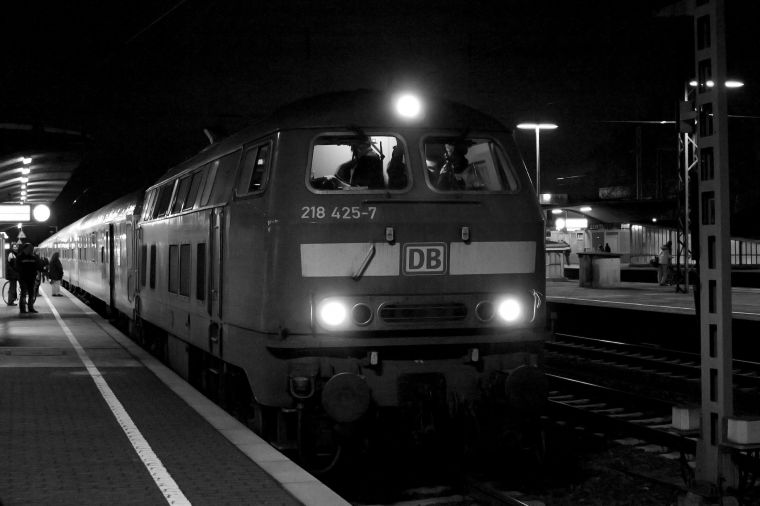 While DMUs are still very frequent in Cologne, there is only train left that goes through Cologne central and is hauled by a diesel locomotive: The twice-hourly Regionalexpress 12 from/to Trier, which consists of Type n carriages (known as Silberlinge) and a class 218 locomotive.

Well, used to, anyway. Starting tomorrow, service will instead be provided by class 628 DMUs. Lots of them, actually (three sets, with the cab car replaced with another power car in each set, for a total of six engines), but it still seems ridiculous. This was the final train, leaving in it’s starting point, Cologne Trade Fair/Deutz, towards Trier.

The commemorative banner it had was removed, because already on entering here it had been blown apart by the wind. As you can see, it’s cab was more than just a little full, and it was greeted by a lot of railfans, including :iconshenanigan87: taking pictures from a different platform â but of course we did not meet because he didn’t know I was there while I forgot to give him a call. Such is life.

The funny thing is that I only got to shot this picture because my train home to Aachen was late by 15 minutes (expanding to 21 over the further course of the journey). Any DB employees reading this: This does not excuse the horrible delays on the RE1, though. Fix it, damn it!