Everything is turning out so gray 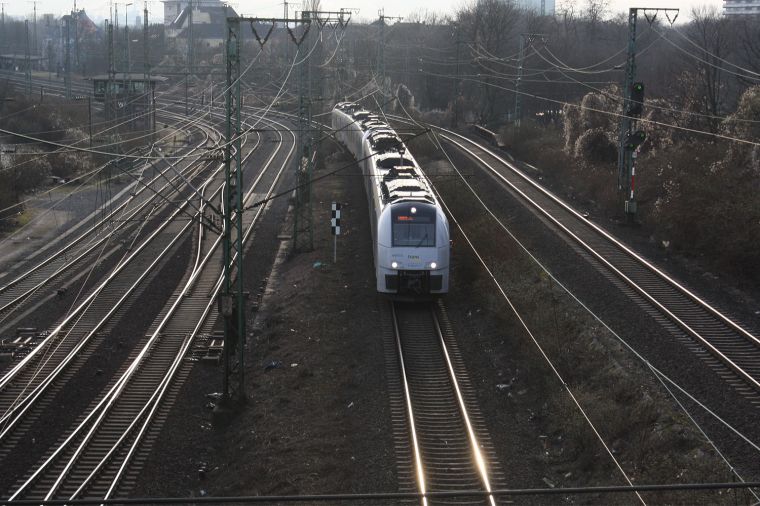 I’ve made so many jokes about these EMUs’s paint schemes that I myself am getting bored with it, but part of me still wonders what they’d look like if only they got some paint on them…

A train coming from Koblenz and consisting of two class 460 Siemens Desiro ML EMUs of the Mittelrheinbahn, operated by Transregio, is leaving Cologne West station for Cologne Central station and Cologne Trade Fair/Deutz. You can nicely see one of the key characteristics of the Desiro ML, which it shares with it’s main competitors: All interesting stuff is up on the roof, which means that the train is fully low-floor (the seats are on pedestals over the trucks).

Cologne West itself is just a small part of Cologne’s mess of rail operations. The track to the right is coming from the central station, and the track the train is on obviously heading there. All the tracks to the left, however, are leading to other directions, evading the constantly jammed central station, and are used for freight trains only. In the background, the track continues south. Freight trains wishing to cross the Rhine in Cologne, as well as some passenger trains which would otherwise have to cross the Hohenzollernbridge twice, will there go over the aptly-named SÃ¼dbrÃ¼cke (south bridge). In addition, one of the three main railway lines along the rhine, the so-called “Rechte Rheinstrecke” (right rhine line) starts there. It is this right rhine line that these Transregio-Desiros have made their home.