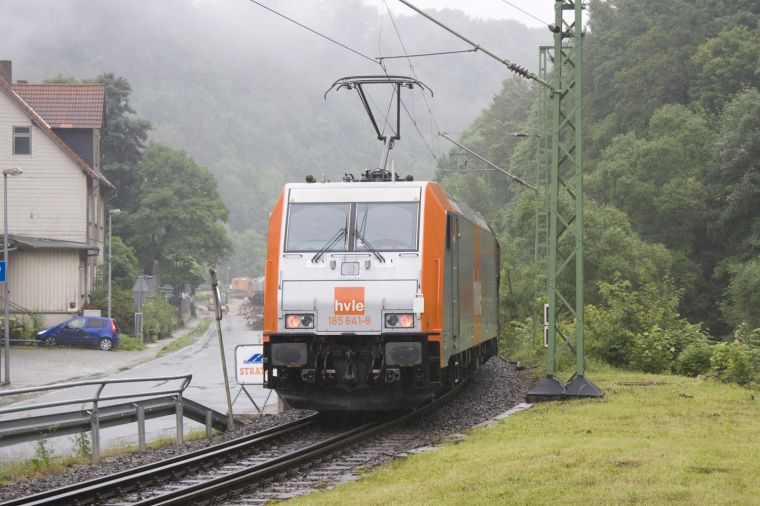 We followed the RÃ¼belandbahn first through Blankenburg to the switchback Michaelstein (the line is very steep indeed), and actually found a train there. However, we neither had enough time nor knew the terrain well enough to take a good picture, so we drove on all the way to RÃ¼beland, the endpoint of the line. There we got another train, heading down.

To cut time at the switchback, all trains have locomotives at both ends these days. Here, 185 641 “Blankenburg” is trailing the train downwards out of RÃ¼beland. An oddity of this line is that it’s the only german line electrified with 25 kV 50 Hz, instead of the 15 kV 16.7 Hz used everywhere else. Historically, this meant that the line could only be used with special locomotives not seen elsewhere in Germany. These days, any boring dual-system locomotive will do, for example the Bombardier Traxx F140 AC2 or class 185.

A few years ago, most traffic was handed over to HavellÃ¤ndische Eisenbahnen (hvle), who did not have any electric locomotives of any kind at that time and instead used some very heavy diesels, most notably Blue Tigers. DB quickly followed and dieselized their remaining trains. This allowed them to shut off the overhead line equipment, which was (especially the main transformer for the line) in need of some repair. One problem with this new situation was that Blue Tigers are extremely noisy, so people living next to the line were rather unhappy. In the end, the state of Saxony-Anhalt paid half a million euros to get the line (by then sold to the quarry company and with all trains run by hvle) running electric again. The equipment was restored, and hvle purchased a number of new electrics, so maybe two months ago electric operation was resumed. At the moment, Railcolor.net lists hvle as having three electrics only, which sounds very low to me but apparently works for them.