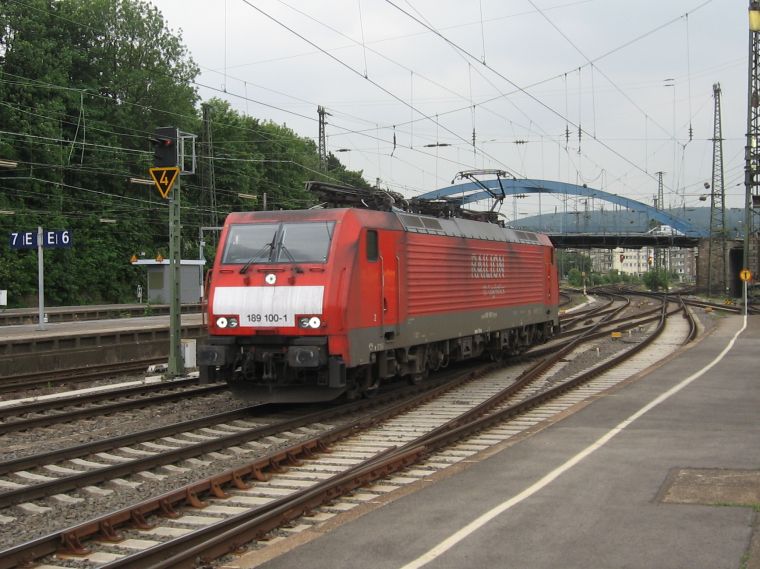 I like to make jokes about dirty locomotives, and I know that’s not really fair because it’s not easy to keep such a huge thing clean. But then, there are cases where it’s just too extreme. Would you look at this, for example? Did 91 80 6189 (breathe) 100-1 D-DB play steam engine?

Anyway, this is the last one of DB/Railion/DB Schenker/Whatever’s order of class 189, or as Siemens calls it, ES 64 F4. Catchy, isn’t it? The locomotive belongs to the EuroSprinter family, has 6.4 MW power (that’s about two american GE Evolutions in one neat little package), is a Freight machine and can operate under 4 different currents. Most of it’s kind haven’t seen much action outside Germany, but this is one of the select few that gets used on service to the Netherlands - hence the ugly white areas in front, legally required there.

It’s still in DB service, like most others, but 189 090 - 189 099 all got sold to MRCE, a leasing company. The idea was that DB would lease them back, and both MRCE and DB would make money out of the deal. Turns out things did not work out, but in a very different way: MRCE suddenly said it needed the machines itself, so now they’re MRCE black and operate for DB competitors. And for other DB companies like DB AutoZug (DB CarTrain, roughly translated), which is very happy to have four-system units available because it mainly does cross-europe service, and it couldn’t have paid for them itself or gotten them from other parts of DB easily. As a general rule, german railroading does not make sense.