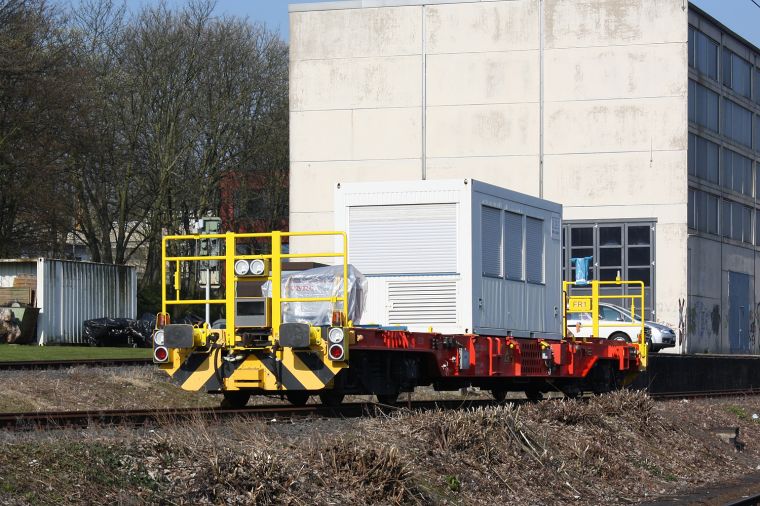 I promised to take a better picture of this more than a year ago, and now I finally got around to doing so. Sorry for the slight delay.

For those who only joined us recently, my university, the RWTH Aachen University, has it’s own rail tracks. As a computer science student, that does not truly concern me, but it’s always interesting to see what they have there, such as this slightly odd thing.

This thing is called the Cargo Mover and is based on the Cargo Sprinter platform - specifically Cargo Sprinter 690 001/501, parts of which (the cabs in particular) are still stored on the RWTHs tracks as well. The Cargo Sprinter was a project by DB to create a freight DMU specifically for containers. Operationally, it wasn’t a success and was cancelled pretty shortly. The vehicle platform of basically a container flat car with motor and cab did prove popular in the MoW market, however, for example for cleaning rail heads in Britain) (picture by [CJSutcliffe](http://cjsutcliffe.deviantart.com/)) or as fire engines for swiss railway tunnels.

The Cargo Mover is a research project using the same platform, sans cabs. The idea is that it will drive fully automatically directly to the shipper, and will automatically couple and uncouple with others of its kind to form longer trains for the main part of the journey. That isn’t easy, both because most german train lines have no in-cab signalling that could easily be reused, but also because DB is cutting connections to many shippers because they are not profitable enough…

I’m not sure what the container is doing on that vehicle, but I wouldn’t be surprised if it’s used as a place for researchers to stay during test work. I am pretty certain that the CM is not homologated for autonomous operation on public rails yet.