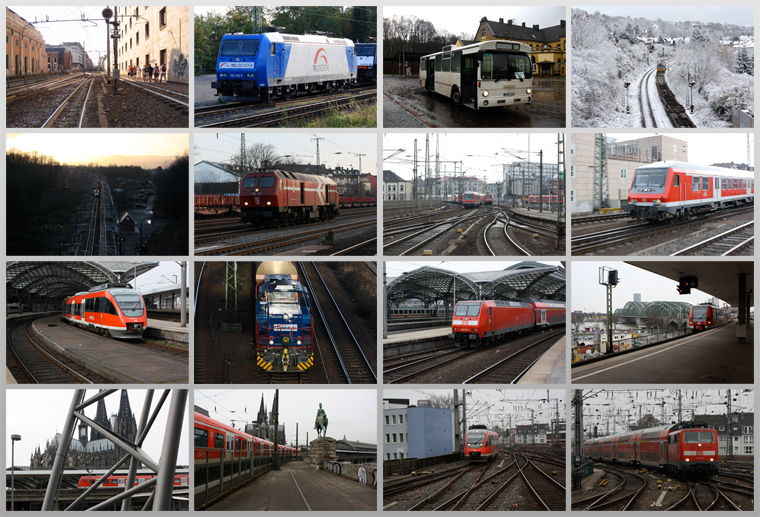 I’m currently all out of presentable pictures, but I do want to present something. So I’ve decided to lay public some of the pictures that are sitting in my “to-be-uploaded” pipeline but for some reason never have been. Starting from the top left:

Rome, ages ago, some quirky electric narrow-gauge railway I can’t define, and of which I’ve posted another shot already. I like the setting, but it’s just a standard shot of empty tracks with the main track not even centered and the sky all white.

MÃ¶nchengladbach. I’ve kept this in my queue because I keep thinking “Some day I will need to show a picture of a class 185.1 electric in the old ATC paint scheme working for TXLogistics”, but let’s face it, I never will and this pic’s boring.

Stolberg. An old VÃV I busworking as replacement for the Euregiobahn. I like how it’s rainy yet the colors are warm, I like nearly everything about it, I’m just not sure how many people here care about buses.

Aachen. I like the winter scenery which I didn’t get as much a panorama of in the other shots from that sequence. What I don’t like is that the engine is hidden under the wires a little. I’m not the biggest fan of shots of a leading locomotive from behind, although with the flat cars here it kind of works out. Though, if I watch this image too long, I get the impression the locomotive is eating them…

Gemmenich, Belgium, not a 100 meters from the german and dutch borders. I kind of like the sunset, I like the locomotive shining it’s light, I like the shining tracks, I hate hate hate the overhead wires obstructing everything.

Cologne. I kind of like having more images of this locomotive, now the last of it’s kind (the other two both burned), despite being number 13, but it’s pretty standard, the sky is white and the light is coming from the wrong direction.

Hanover. See, this is why I don’t post pictures from Hanover Central station, even though I do have them: It’s just incredibly dull and gray all around. Two parallel trains are always nice but in the end not enough.

Hanover again. Actually I like this, very dynamic and all, but in full resolution you’d see that it lacks the crucial sharpness right around the headlights.

Cologne (as are all from here on. Boring, I know). It’s nice to find a class 644 Talent that’s still red as opposed to pink, but something about that angle feels wrong. My sister says it makes the train look fat, and she’s not wrong.

Chemion’s “Nicole” has one of the most chaotic paint schemes I know. Fonts are all over the place, clashing colors, it really looks odd. This effect is only increased by the lighting, which means the total image is bad.

Call me crazy, but to me even shooting the rear of a push-pull train is wrong, even though it’s only that the lights are red instead of white. I’ve wanted to turn this into some montage to show the differences between the classes 146.0, 146.1 and 146.2, but nobody cares and also my only picture of a 146.2 absolutely sucks.

I’ve long wanted to take a picture with a train and the north side of the bridge as background. I’m not sure it’s geometrically possible. This one comes close, but I hate that the train is at the platform, looking like a hovercraft, and also the graffiti and not to mention the bland roof (aside: Graffiti I understand, that’s just vermin following their instincts, but someone got paid for that roof!).

A side look at the S-Bahn line and the cathedral, through a girder structure holding up a tent where musicals are held. Ruined by the bland roof again and of course by me chopping of the cathedral’s top.

Kind of nice angle and energy, but a) the fence and b) the electrification poles annoy me to no end. I am fond of that horse butt though, I mean it’s not often you get to see that side of the city.

Again, this angle makes the class 644 Talent look fat. My sister claims the train always does, but I think the 643.2s we have in Aachen don’t. Maybe it’s the dark blue banners we have at the sides.

I’ve never posted a picture of a class 111 since I thought all my pictures of the 111 are boring. Maybe the locomotive is boring? Can’t be me being boring, because although I am, that never stopped me from posting anything.